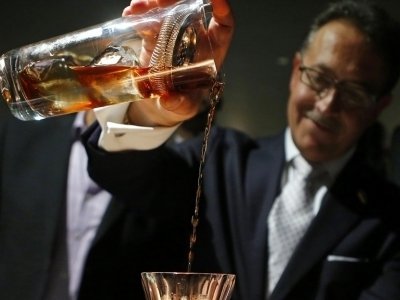 If you can do it, someone wants to beat it, doing it faster, longer, bigger, and higher and in doing so, some of the craziest food world records are set. The Guinness Book of World Records has been the arbiter on what’s the biggest, the longest, the highest, the fastest and the most since 1954 (although the book reference has been dropped now). What it isn’t, however, is an arbiter of taste and it doesn’t matter how questionable, if a record can be set, it is set. That’s how some of these sometimes crazy food world records spur people on to do daft things in the name of eating.

So many records for giant foods are fun, but they’re sort of invalid because you can’t actually buy those foods. Some you wouldn’t even want to eat because how great something tastes is not a factor. This is why I decided to find one of the food world records where you can buy the giant food item in question. This award goes to the hot dog from Gorilla Tango Novelty Meats. It’s a whopper of 3.18kg, or 7lbs in weight. That makes it bigger than an actual dog!

Donald A. Gorske from the U.S. holds the record for the most Big Macs eaten ever. He hit his 26,000th burger on October 11, 2012. This is his fortieth year of eating them every day, and the record is still counting, so who knows where he is now? On a side note, exactly who decided to verify this world food record for forty years straight?

Another of the more interesting food world records is the largest chocolate coin ever made. It was presented at the Cioccoshow Exhibition in Italy. Unsurprisingly, it isn’t commercially available. It was a special coin made in 2012 to commemorate Guinness World Records Day. In total, it weighed 658kg. They also managed to wrap the 1,450-pound coin in silver foil. Who would have thought you’d ever encounter a chocolate coin that can kill you?

Cocktails are ridiculously expensive in some places. The next time you complain about your favorite colorful concoction going up by a few dollars, think about Salvatore’s Bar in London. On October 11, 2012, the record was set for the most expensive cocktail ever sold. It was made by Salvatore Calabrese and he successfully sold it for $8,802.37, at the time the record was set. This was about £5,500 in British money. It was called Salvatore’s Legacy and it was made from heritage ingredients, some of which were 200 years old.

5. Most Expensive Whisky Sold at Auction

Whisky is the drink of those who want to either look sophisticated or get drunk fast. No matter what group you fall into, be thankful that you didn’t pay for a bottle of Macallan in Lalique. This bottle of whisky presented in a bottle made by legendary French glassmaker René Lalique was 64-years-old in November 15, 2010 and sold at New York’s Sotheby’s for $460,000.

Eric Booker is a famous competitive eater. He isn’t the best in the world, but he damn sure succeeded where donuts were concerned. In October 2002, he successfully downed 49 glazed donuts in eight minutes. It’s no surprise that this record has stood since then, with nobody even coming close to this in one of the competitive eating world records most regularly contested.

The world food record for the longest sandwich belongs to an entire village. Hazmieh village in Beirut, Lebanon, set this record way back in May 2011. Three teams came together to craft a sandwich that measured 2,411 feet and five inches, or 735 meters. A few more meters and it would have likely been longer than the village itself!

Takeru Kobayashi. This is the name of the holder of perhaps one of the most (I don’t want to say disgusting) icky (?) stomach turning (?) competitive eating world records in existence today. The Japanese are known for doing some of the strangest things in the name of competition you’ve ever seen, but this takes it to a whole new level. Cow brains are essentially like human brains, except they’re smaller and cooked for competitive eating. He ate 57 cow brains, or 17.7 pounds of mush, in just 15 minutes.

Who doesn’t love cupcakes? In November 2011, Georgetown Cupcake decided to make the biggest cupcake ever. They succeeded by baking a cupcake that weighed 2,594 pounds. It was 56 inches in circumference and was a gigantic 36 inches tall. It was even shown on TLC’s DC Cupcakes.

As you can see, the world food records are a little mad. Have you ever felt compelled to see how many boiled eggs you can peel in a minute, or how many cream crackers you can eat without needing a drink of water? No? Me neither!