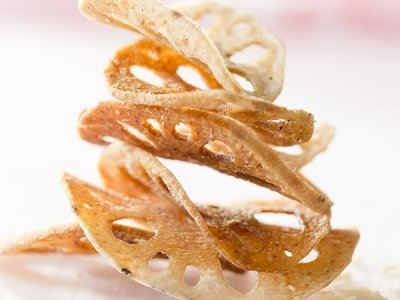 If you’re a foodie or an adventurous cook, you probably get quite excited by the array of exotic Asian vegetables in the produce section. You might even visit Asian stores simply to get your fix of exotic vegetables and fruit. If however, you stand in front of the shelves totally bewildered by them, you’re not alone. Many people will look at them, be confused and pick up their standard staples. If you want to add an Eastern flair to your cooking, try some of these exotic Asian vegetables.

The lotus root is indeed, the root of the lotus flower. The rhizome of the lotus is highly esteemed in most Eastern cultures and it is one of the exotic Asian vegetables growing in popularity in the West. It is crunchy and delicate and like most vegetables, has plenty of nutritional benefits. 100g (~4 ounces) has a calorie count of 74 and it is an excellent source of fiber and complex carbohydrates. 100g will provide 73% of daily recommended value of Vitamin C and it also contains B vitamins, copper, zinc, magnesium, and iron. Lotus root must be cooked before eating but it can be fried as tempura, and used in salads and stir fries.

Snake beans are very common all over South East Asia. You might also see them described as yardlong bean, garter bean, asparagus bean or Chinese long bean. They are long – as the names suggests – and best eaten when young and tender. They are used in much the same way as green beans or runner beans. Snake beans are used in stir fries in China and Kerala (India), and the Malaysians use them stir fried with chili and shrimp paste. Snake beans are very nutritious, containing 47 calories per 100g and are fat free. They have a high content of both soluble and insoluble fiber and if you’re looking for an excellent source of folates, you won’t find much better than the snake bean (100g = 15% RDV). If you’re going to try snake beans, you’ll also be loading up on vitamins C and A and minerals magnesium, calcium, iron, manganese and copper. These long beans would certainly make a difference to your usual French, lima or fava beans - yes?

These are my favorite among all exotic Asian vegetables. I just love them. They are so sweet and juicy and crunchy. To my mind a Chinese-style stir fry just isn’t a stir fry without water chestnuts. Despite their name, they are not a nut. The “chestnut” is actually the edible corm of a sedge (grass plant) that grows in marshes and wetlands. The corm is peeled to reveal a creamy white flesh. The reason I like them is that due to their density they actually remain crispy after cooking even if you cook them for ages by mistake (like the aforementioned lotus root too.). I must admit I’ve never given much thought to their nutritional value because I love the taste and crunch, but they are in fact 90% carbohydrate and a good source of fiber, Vitamin B2 (riboflavin), Vitamin B6, potassium, copper and manganese. Why not try some in your next stir fry?

Now, if you were to take my favorite and add bamboo shoots, you’d have the veggie mix my mum always chooses when we have Chinese take out. I don’t mind the mix but I have found sometimes, bamboo shoots can be a little fibrous in texture for my liking. Essentially, they are as the name tells us – shoots from young bamboo plants. They are used all over Asia where they can buy fresh, whereas in the West we usually have to have them canned. I think you’ll be interested to know that Japanese scientists have discovered that bamboo shoots contain anti-cancer agents, so if you want something crunchy to increase the number of foods that fight free radicals, throw some shoots in your next salad or stir fry. Bamboo shoots is one of the great natural foods that has been eaten for millennia and can claim protein, amino acids, healthy fats, B vitamins, iron, manganese, phosphorous, potassium and zinc among its nutrients.

If there is a secret to the longevity of the islanders of Okinawa, it might well be the bitter melon, aka bitter gourd. Although originating in India, it has spread across Asia and is used in many cuisines of the region. It is another of those exotic Asian vegetables whose name tells it like it is. Each cuisine has adapted how it cooks the bitter melon to make it palatable. In terms of how best to use it, the most useful advice I can give you is to search for recipes you would like to try. This is not a veggie you boil and mash and serve with your steak or pork chop. You might well ask why I recommend one of the most bitter of all vegetables? Well, if you want to live as long as the Okinawans, you too can gain the benefits of the bitter melon’s disease preventing and health promoting phytochemicals. Bitter melons are rich in fiber, vitamins, minerals and antioxidants. Notable contents are polypeptide-p, folates, Vitamin C, Vitamin A, B vitamins, carotene, lutein,and xanthin, as well as the minerals potassium, magnesium, zinc, iron and manganese.

If you love leafy green vegetables (and you should because they are so very good for you) you’ll be very happy to be introduced to pak choy. The leafy greens set is one of the most confusing areas of exotic Asian vegetables because there are so many varieties and the names are all very similar: pak choy, bok choy, red choi, pe-tsai, petsay, tatsoi, etc. But, really, all of the types of “Chinese” cabbage taste great and are good for you. Steam them, braise them or use them in stir fries but please try them. The leaves are soft and the stems are sweet, succulent and nutritious. You’ll love that pak choy only has 13 calories pr 100g and that it is a very rich source of other major nutrients. Among its major antioxidants is Vitamin C with 100g providing 75% of your RDV. As well as being an excellent source of Vitamin K, pak choy will provide you with more Vitamin A, carotene compounds and other flavonoids than other brassicas. And, as well as B vitamins (5, 1, and 6), pak choy can also boost your intake of calcium, phosphorous iron, potassium and magnesium.

The Japanese radish, white radish or mooli is probably one of the most well known exotic Asian vegetables, and is being seen more and more on our produce shelves. I’ve included it in my list because I’m sure many of you have picked it up with interest and put it down again rather than putting it in your cart because you don’t know anything about it. If you are Japanese however, you wouldn’t pass it by. It is one of the indispensible ingredients of Japanese cuisine. It’s used in stock, pickles, dipping sauces, added to salads and sashimi and it’s unlikely that you’d ever eat a meal in Japan that didn’t include daikon in some way. It isn’t as nutritious as the other veggies I’ve told you about but daikon is very low in saturated fat and is a good source of fiber, vitamins B6 and C, folate, calcium, iron, magnesium and potassium.

I do hope you’ll give some of these exotic Asian vegetables a try. They are becoming so much more readily available and if you want variety in your diet these will certainly provide. They are all pretty easy to prepare so just look up some recipes to see what tickles your taste buds. Have you already tried any of these?