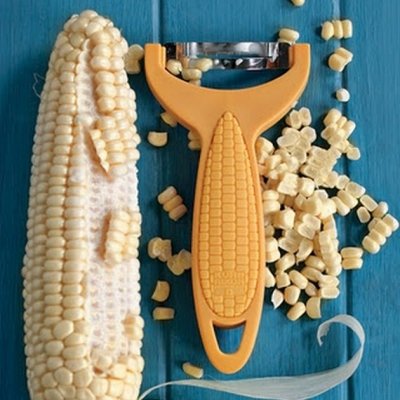 Technology gets better all the time, but there are some old fashioned kitchen gadgets that some people still have in their cooking space because they are handy and still useful even after all these years. Sure, times have changed and you can get virtually anything you want already made and ready to eat, but back in the day, people did things differently. Check out all these cool old fashioned kitchen gadgets and you might just be inspired to take a trip back in time.

Via N/a Moustache and Kiss Double ...
No retro kitchen was complete without a set of old fashioned glasses. Hence the name, these are one of the classic old fashioned kitchen gadgets you might not see everywhere anymore.

Via Nostalgia Electrics&trade; Old Fashioned Wood ...
It's hard to believe that there was a time when people couldn't just go to the store for a pint of ice cream. They used one of these to make their own.

Via fab.com
Frozen pop molds are actually making a comeback, but like ice cream, people used to have to make their own instead of buying them at the supermarket.

Via momskitchengadgets.com
Sure, you can still find KitchenAid mixers at department stores, but they sure don't look like this anymore.

Via bourbonandboots.hardpin.com
Can you imagine having to grind your own pepper from this contraption? It looks a little big, don't you think?

Via Ceramic Chick Egg White Separator: ...
Egg white separators come in a huge variety of styles, but in the old days they were usually well made and not just plain old plastic.

Via Electronics, Cars, Fashion, Collectibles, Coupons ...
I love the color of this gadget. It makes it look easy to slice hard boiled eggs too.

Via Old Fashioned Kitchen Gadgets That ...
You could use this sturdy tool for all sorts of draining needs. I wonder if you can put it through the dishwasher.

Via ThisIsWhyImBroke.com
Look at how adorable this is. It's made to look like the old school carts that sold cold treats to kids on hot days.

Via Apple Peeler/Corer
It might be vintage, but this tool proves its worth by peeling, coring and slicing an entire apple in just minutes.

Via Old Fashioned Kitchen Gadgets That ...
Cast iron skillets have been around for hundreds of years. They might have been invented a long time ago, but this old fashioned tool will stand the test of time.

Via Gravity Interior
There once was a time when people had to grind their own sausage with a tool like this one. That doesn't sound like a very fun chore to me.

Via How to Clean Wooden Pestles ...
Chefs from generations back have been using a mortar and pestle for all sorts of grinding needs. Use it for spices, garlic and much more.

Via 24 Hostess Gifts Under $20
These have been recreated, but old fashioned milk jars are fun for any kitchen. Use them for milk or go ahead and turn them into decor items instead.

Via Nostalgia Electrics 54" Old Fashioned ...
You saw the tabletop version above, but this big cart was one you might have seen at fairs and carnivals.

Via Old Fashioned Rolling Pin, Wooden ...
Look at the quality of this tool. They sure don't make kitchen gadgets like they used to.

Via John Lewis | Page not ...
No, you don't need this for cooking, but many retro homes didn't have a television and used a radio for entertainment while preparing meals.

Do you have any of these old fashioned kitchen gadgets lurking in your space? I may have one of those egg slicers somewhere and I have a whole pile of cast iron skillets. Do you remember your mom or grandma using any of these items?