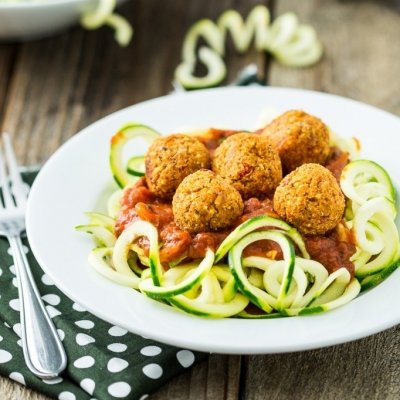 If you don’t tolerate gluten but love spaghetti, you may want to try some of these yummy alternatives to wheat spaghetti that are totally delish and 100% gluten-free (some are even grain-free too!) Wheat is a common allergen most people don’t even realize affects their health or sense of well-being. Luckily, there are almost as many gluten-free choices on the market as there are wheat products, like some of these alternatives to wheat spaghetti. Give them a try and you’ll be surprised at how much they satisfy you and actually taste really good. Because every chick out there deserves a hot bowl of spaghetti every now and then!

Brown rice spaghetti is one of the newer and better alternatives to wheat spaghetti. The noodles have a brown color and fairly mild, yet hearty taste like wheat noodles. They’re also easy to find and inexpensive.. Brown rice is full of complex carbs and amino acids, along with B vitamins so getting it in any form is always a great idea.

Shirataki noodles came out around 10 years ago and have been a popular item with dieters and low-carbers ever since. They’re virtually calorie-free with only 20 calories per serving. Made from tofu that’s non-GMO, these noodles have a slippery texture just like real wheat-based noodles. They’re pretty much tasteless, so I’d suggest using your favorite store bought or homemade sauce and adding an extra pinch of herbs or a touch of sea salt to add more flavor.

Miracle noodles are even more diet-friendly since they are actually completely calorie-free. They’re derived from a fiber that the body doesn’t actually digest and instead uses it to fight fat. This fiber is known as konjac root or glucomannan. It’s been linked to helping people feel full on fewer calories and is also healthy for gut and digestive health. Miracle noodles are almost clear in color and completely tasteless. They’re pretty much only good for those that want a noodle base but don’t mind that they’re devoid of flavor.

Black beans are high in protein, iron, potassium, fiber, and B vitamins. Black bean spaghetti is a dark spaghetti that’s mildly nutty in flavor and actually quite enjoyable to eat. You can find it online and in some supermarkets like Whole Foods.

Quinoa spaghetti is a great item to try if you love regular quinoa. The protein-rich seed-like grain has a hearty taste with plenty of fiber and nutrients to offer- even in spaghetti form. Some brands use a blend of quinoa and corn or quinoa and wheat so if you purchase quinoa spaghetti, be sure to read the ingredient label to make sure it’s only based on quinoa as the best option.

You may have heard of sprouted grain bread, such as Food for Life Ezekiel bread. This bread is incredibly high in protein, flour-free, and can be used anywhere that bread is. Food for Life and other companies also produce sprouted grain spaghetti. Though the noodles and bread aren’t actually wheat or gluten-free, they are a healthier alternative than regular wheat-based items since they’re sprouted before processing and retain none of the ingredients that cause the harmful side effects of regular wheat products.

Buckwheat is actually a seed, not a grain or form of wheat at all. We have not just buckwheat to enjoy but everything from buckwheat flour to pancake mix, and now even spaghetti! Buckwheat spaghetti is also called soba noodles and has a mild and slightly nutty flavor. It’s a great choice for those that want a hearty mouthfeel and prefer a more filling noodle to a calorie-free one.

You can make your own sweet potato noodles by peeling them and then using a spiralizer or microplane zester. This adds a huge pop of color and so much delicious flavor. Though the spaghetti will have a different flavor, it’s still overall extremely delicious. Some companies also make dried sweet potato noodles or dehydrated versions so look for these online or in stores if you don’t want to make your own.

Zucchini noodles have been popular for awhile and they’re a great choice if you’re watching your carbohydrate intake or just want an extra dose of veggies. Zucchini has a hearty texture with a mild taste, which makes it perfect as a noodle replacement. Or, you could just make things much easier and use spaghetti squash (my personal favorite.) Just bake the squash whole at 400 degrees for one hour and remove from the oven. Let it cool for ten minutes, cut it in half and then pull the “noodles” out of the squash with a fork and discard the seeds.

You can also find seaweed noodles made from kelp, along with some varieties that combine multiple grains for a complete gluten-free product. Have you ever had one of these alternatives to wheat spaghetti?