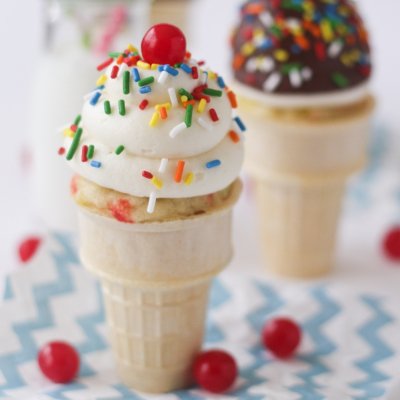 Everybody loves cupcakes, but it's tiring to eat the same old kind again and again during every birthday and holiday party. That's why you should set out to learn some new recipes that will shake things up. If you create something that none of your friends have ever tried before, they'll be impressed by your baking skills, and isn't that what you want? If it is, here are a few unique batches of cupcakes that you can whip up for a special occasion:

These are just about the coolest cupcakes you could ever make. On the outside, they look just like any other cupcake. However, they're actually filled with candy! All you have to do is create a cupcake, pull out the center of your cupcake with a cookie cutter, fill it with candy, and then place the top back on it. It looks like a difficult thing to make, but it's actually super easy!

These are regular cupcakes with melted skittles hidden inside. Of course, the best part of the recipe is the rainbow frosting. Don't worry, because this tutorial will give you step by step instructions for creating the yummy cupcakes and the yummy frosting!

You can make any type of ice cream cupcakes that you'd like. It all depends on what your favorite flavor is. Either way, all you need to do is put a tablespoon of batter into your cupcake tins and cook them. When they're done, put a scoop of ice cream on top, and then put some whipped cream on top of that.

This recipe requires a weird mixture of ingredients, so make sure you have a strong stomach. If you do, you should buy cake mix, pudding mix, vegetable oil, eggs, mountain dew, and Doritos. After you fill your cupcake trays and bake them, you should create your icing and then stick little pieces of Doritos on top. It sounds pretty gross, but it tastes pretty delicious. Try it and see!

I bet you've never had hamburgers for dessert before! This is an adorable cupcake that will shock all of your friends. Even though it looks like a cheeseburger, it'll taste just as delicious as the rest of the cupcakes on the list.In fact, it's even tastier, because it involves a layer of brownie!

You're going to need quite a few ingredients for this recipe, so make sure you jot them all down. You'll need ice cream cones, miniature ice cream cones, sprinkles, icing, and little candies. Of course, you're also going to need to create colored cupcakes to stuff inside of the cones. It's a lot of work, but it'll all be worth it once you see the finished product.

Now you know how to create plenty of new cupcakes that you can use to impress your friends! Which one of these recipes would you love to eat?