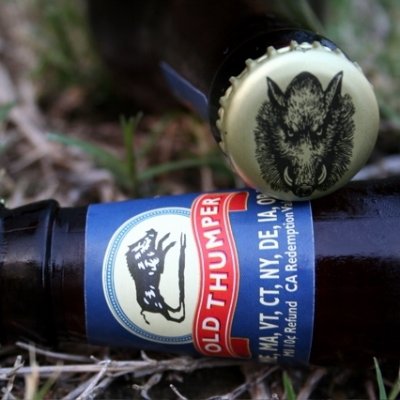 My quest to stock the bar at my upcoming wedding with things I'd like to drink has led to me trying a lot of New England craft beers. See, I don't drink a lot and I hate beer, so I wanted to try something other than the typical beers – Bud, Heineken, Corona, things like that. Craft beers have become something of a culture, something to drink for pleasure rather than a buzz, and I decided to give them a try. What I've found has surprised me, and if you're not familiar with craft brews in general and New England craft beers in particular, here are some that really appealed to me.

Portland, Maine's Shipyard Brewing Company is amazing. They're known for producing some of the tastiest, most thoughtful New England craft beers ever tasted, and they've got a great blueberry brew. However, I'm all about Old Thumper, a bitter, pale English ale. The beer originated in England, and while bitter, the malt mixes in with fruity notes, so the overall taste has some muscle behind it.

Cisco Brewers is a Nantucket brewery, and it's almost like you can taste the ocean in the beer. I don't mean that it's salty or anything, it's just so fresh and crisp. Grey Lady Ale is a witbier, or wheat beer, and it's actually brewed with orange, grapefruit, and lemon. There's some chamomile in there too, so drinking it is actually a little soothing. It's got a great fragrance to go along with it, which only adds to its overall appeal.

For all I know, this makes me a criminal craft beer drinker. Beer Works is a local restaurant and microbrewery with South Shore and North Shore locations. The Salem Beer Works first introduced me to craft beers and I've been in love ever since. I especially love their seasonal beers – which we'll also be having at the reception, a pumpkin beer. The Double Apricot Saison is just decadent. (So, incidentally, is the blueberry beer.) I have to warn you, if you like to taste the beer first and the fruit second, this one probably isn't for you. I think there's a nice balance, but some tasters find it too sweet.

Pretty Things Beer and Ale is rather close to me, in Somerville, Massachusetts. Once upon a time, their recipe for Baby Tree included dried plums, and the one time I got to try it, my taste buds nearly raptured (yes, raptured, not ruptured). It still has dried fruit, thank goodness, and now you can really taste the crème brûlée-like undertones. This beer made me love ales in the abbey-style, and may I add that it's also a gorgeous color.

I adore Portsmouth, New Hampshire, and the fact that you can find fantastic beer there only makes me love the town more. I love IPAs, and I know enough about them now to greatly prefer the Smuttynose IPA. It has a serious bite and, of course, plenty of hops – five, in fact. You can taste some tannins, but there's also this fragrant herbal, citrus vibe going on – magnificent!

Somehow you just expect there to be a microbrewery in Cambridge, and you expect it to create names just like “Audacity of Hops.” I love the audacity behind the name and the beer itself – but, in the spirit of Cambridge, it isn't too showy at all. The Imperial is an IPA in the Belgian style. As a sucker for IPAs already, I'm almost a fan by default. It's very crisp and kind of piney. It's also 8 percent, so watch that.

Headwall Alt turns ten this year, and I suggest you celebrate with a taste. It's one of my favorite brews from the New Hampshire based brewery, and if you like a toasty beer, I bet you'll agree. The flavor profile is excellent, with a vanilla and cinnamon touched smokiness that makes it so warm. It's not as dark as a porter and it's not heavy at all.

I'll definitely be having a few of these at my wedding, along with some of those traditional brands. Every palate is different, and some people will never enjoy beer for the sake of it. If you really enjoy experiencing different flavors and regional selections, though, these are the picks of a girl who until recently detested beer and didn't really drink alcohol. I'd love to hear your picks too, though – we haven't made the final selections! And remember, please, as always – drink responsibly!