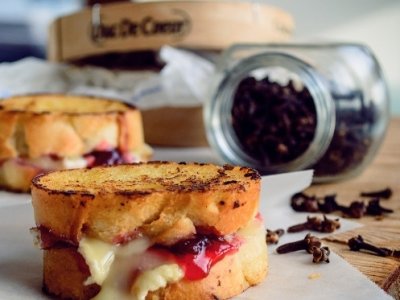 I’m a huge fan of herbs and spices for their tastes and health properties, but of all spices out there, there are more reasons to add cloves to your diet than any of the others you’ll find today. Many people overlook cloves in favor of some of the more popular ones, such as cinnamon, ginger, nutmeg and cardamom- and trust me, I adore those too. Yet I don’t just appreciate the tastes they bring to my foods, but also the health benefits, which is why I have so many reasons to add cloves to my foods. Ground cloves are the easiest form to buy, and very strong in aromatic tastes, so you don’t need a lot. They’re not just for your favorite pie recipe either. Check out my favorite reasons to use cloves in your recipes, and try adding some to your dishes today!

One of the biggest reasons to add cloves to your diet is for their antiviral properties. Cloves are rich in natural, detoxifying antioxidants that are known to fight the flu virus and candida yeast infections. I like to add just a touch to hot tea when I’m not feeling well, or stir some in a comforting bowl of oatmeal.

Cloves are a natural analgesic and antiseptic. They make a wonderful, quick way to relieve a toothache by adding just a bit of clove oil to your mouth and gums. Many children who suffer toothaches may be hesitant because of the taste, but this age old remedy is known to be used quite frequently in children’s toothaches.

Cloves, like vanilla and cinnamon, are natural aphrodisiac agents. They promote serotonin in the body and stimulate the libido. They also add warming properties to the body and improve sexual function in both men and women due to increased blood flow.

One of my favorite reasons to use cloves is they are a wonderful digestive aid. They are known to help calm colic in babies, as well as IBS in adults. They are very powerful in helping lower inflammation in the gastrointestinal tract. Just be sure to use a little at a time, since too much will ruin the taste of your food.

Since cloves increase serotonin, they are a natural anti-depressant aid. Cloves also release the natural chemical found in the body known as GABA, which is produced through calming foods and activities like walking and yoga. GABA calms anxiety from stress, and cloves are a natural way to induce that chemical production in your brain, all through your foods.

Cloves have a wonderful fragrance, if you’ve never smelled them before. They’re potent, but they have a lovely, soft, warming smell to them. They automatically remind me of coziness and warm desserts like pie, spice cakes and cookies. You can use them in any dish you want, so experiment with around ⅛ tsp. per recipe. You can also boil about 10 whole cloves on the stove with orange peels for a wonderful home potpourri.

Cloves are also known to enhance other flavors, such as cinnamon and vanilla. They also enhance the tastes of heartier vegetables like pumpkin, sweet potatoes, squash and carrots, while adding just a touch of sweet and savory at the same time.

If you’re an athlete or suffer inflammation, definitely consider adding cloves to your foods or beverages. They contain volatile oils such as eugenol, which is a natural pain reliever. They’re a great way to quickly relieve pain in the muscles, stomach and even a bad headache by lowering inflammation in the body.

Not only are cloves rich in benefits for your body, but they’re also an overall great source of antioxidants. In fact, they provide many anti-aging properties through their antioxidant content, such as their high amount of flavonoids. Flavanoids are found in foods like chocolate, berries, vegetables, fruits and other healthy foods. Cloves are also rich in manganese, which is an important mineral for many processes in your body such as enzyme production. Just one teaspoon of ground cloves contains over a third of your daily manganese requirements, as well as a good bit of omega 3 fatty acids.

Try adding cloves to your next recipes. If you need ideas, feel free to add them anywhere you see spices like ginger, nutmeg, cinnamon or the flavors orange, chocolate and/or vanilla. Usually, cloves pair very well with those flavors and make a great addition to foods with those ingredients. Do you use cloves in any of your recipes?