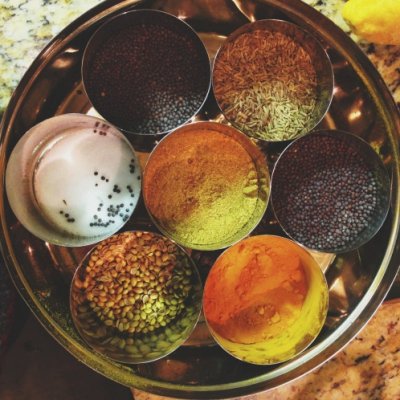 Don’t be afraid of this spice. You can put in as much or as little of it as you like when cooking Indian food but don’t eliminate it entirely. It adds a whole new layer of flavor that is very important in Indian cooking.

Another commonly used spice, turmeric powder also has medicinal properties and can be found in every Indian cook’s spice box. However, it has a very, very strong flavor and should be used sparingly or it could be the only thing you taste (and not a good taste at that)!

Made from dried coriander seeds, coriander powder is another commonly used spice, especially for vegetables. It doesn’t taste very good with tomatoes though so keep that in mind when cooking!

Commonly used by tempering in hot oil, cumin seeds are used in quite a few Indian dishes, from vegetables to lentils and even to flavor steamed rice and give it a delicious aroma and taste. The same cumin seeds can be dry roasted and ground to make cumin powder – a common flavoring agent for Indian style curd.

Again used in tempering with hot oil, mustard seeds are used extensively in south Indian cooking and add a special flavor (which I personally love) to the food.

Another staple of south Indian cooking, curry leaves can be used fresh or dry. The most common way of using them is by tempering them in hot oil along with other spices.

A powder made by dry roasting and blending together several spices, garam masala is used in small quantities in a lot of Indian cooking. It adds that touch of exotic to any dish and is typically Indian. The dry spices that make up garam masala include black cardamom pods, green cardamom pods, cinnamon, cloves, nutmeg, mace, black peppercorns, bay leaf and cumin. (You can also keep these individual dry spices in your pantry in case you want to make your own spice mix or use them individually when trying out more complex recipes.)

Go to most any Indian home and you’ll find your host garnishing the food with chopped up fresh coriander leaves. There is just something about fresh coriander that adds flavor to Indian food and I know my mum never lets food out of the kitchen without it!

These 9 spices and herbs are like a starter pack for Indian cooking. As you get more comfortable with the feel and taste of these, you can experiment with spices like asafoetida, fenugreek and even onion seeds (this list can be never ending really). Have you tried your hand at Indian cooking? What are some Indian spices and herbs you’ve enjoyed using?