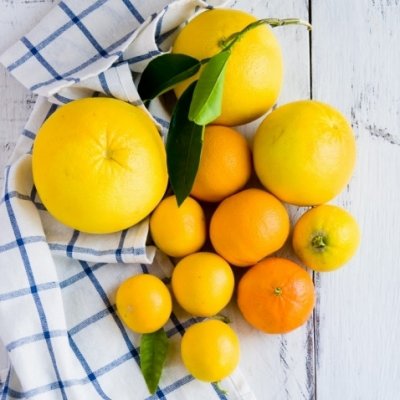 1. Origins of the Navel Orange

The popular navel orange originated in Brazil before 1870 from a spontaneous mutation. People adored navel oranges so much that saplings were eventually brought to California, where a woman named Eliza Tibbets cared for them. Interestingly, all of the navel oranges we have today are ancestors of the trees Tibbets cared for, and one of these trees is still standing and producing fruit! As interesting as the Eliza Tibbet’s tree is, there are other fascinating facts about citrus fruits to learn.

Most oranges are picked before they are fully ripe, when they are still green. To compensate for this, oranges are degreened. One method of degreening oranges is to dye the peel with citrus red number 2. Dying citrus peels is banned in California and Arizona, but Texas and Florida do dye their oranges. Another method of degreening is to expose the oranges to ethylene gas while they are in the warehouse. This does not ripen the oranges, but it does turn peels orange.

3. The Pith is Healthy

Orange juice is very healthy; it has many nutrients including beneficial antioxidants. However, most of the orange juice that you buy in the grocery store is old and has lost nutrients. It can sit in million-gallon containers for months because the oxygen in the tanks is removed to prevent spoiling! While the orange juice may not be spoiled, the flavor is lost and orange flavor is added. Clearly, when it comes to orange juice, fresh squeezed is best!

Grapefruits are a bitter citrus fruit, but the red varieties are sweeter than most. To get sweeter, red grapefruit researches at Texas A & M University exposed seeds to radiation in the 1950s. Exposing seeds to radiation is a quick way to mutate the genes. Some of the seeds produced red grapefruit that was sweeter and well-liked, including the Star Ruby and Rio Red Varieties.

7. Alexander the Great and Lemons and Limes

Lemons and limes are native to southern China and northeast India, and they remained there until the fourth century B.C.E. At that time Alexander the Great took such an interest in lemons and limes that he brought seeds from Persia to Greece. The seeds were cultivated and the fruit became popular. They were so popular that hundreds of years later Christopher Columbus brought seeds with him to Haiti!

Citrus fruits are fantastic fruits that have so much flavor. The facts regarding citrus are fascinating. I know I will never think about orange juice or red grapefruits in quite the same way. Which of these facts surprised you the most?