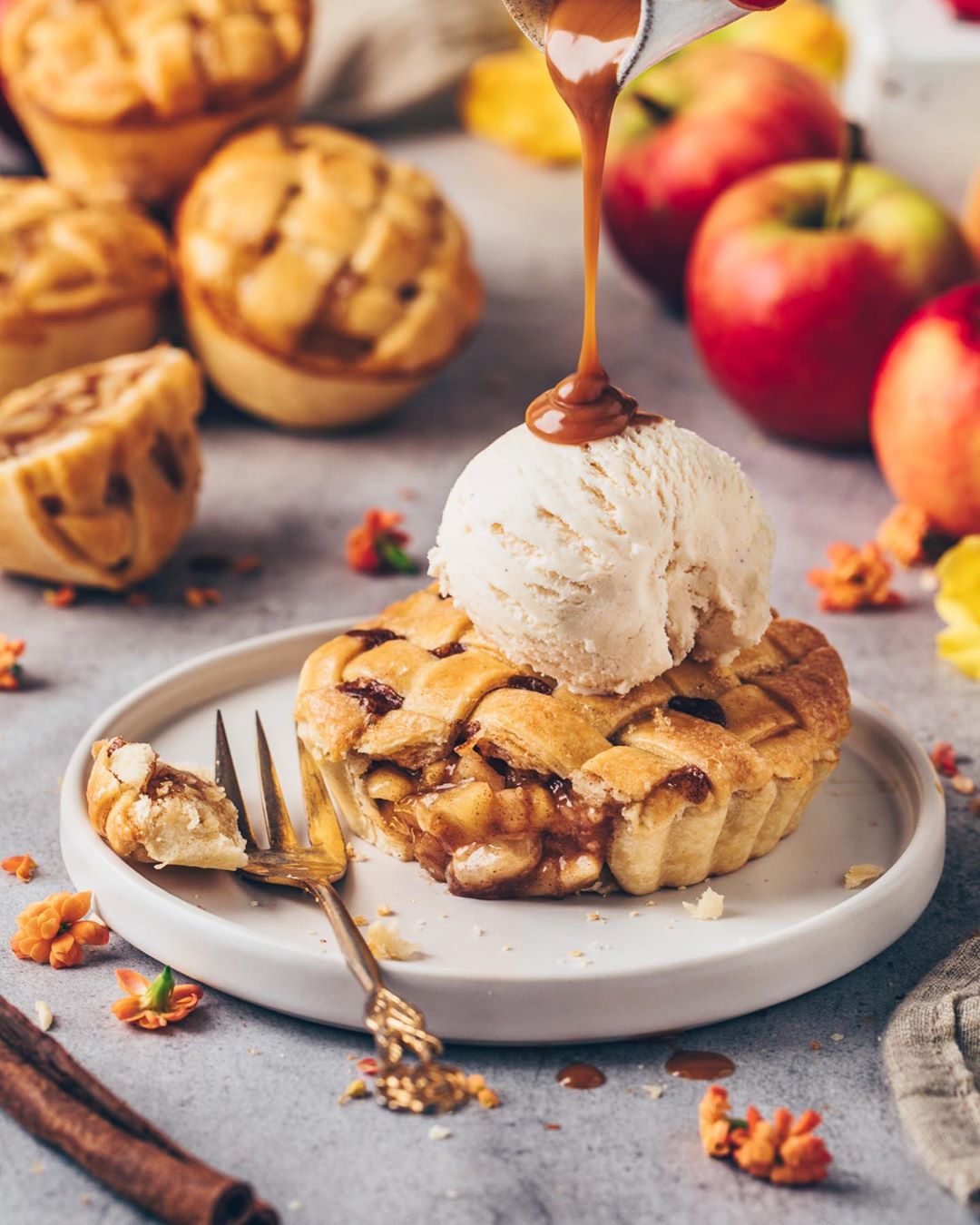 Different varieties of apples are available all year round, so take advantage of them by trying out some of the sweetest and most unique offerings out there. I like to do a “taste test” of apples from August through November (which is prime apple season here in the South) to discover which varieties I enjoy the most and always love sharing which ones stand out above the rest. All varieties of apples make a great addition to your diet since they’re high in Vitamin C, potassium, water, soluble fiber, antioxidants. In fact, apples are so rich in antioxidants, they’ve actually been linked to improve brain function. Though all apples make a sweet, healthy snack, these below certainly do stand out above the rest!

Fuji is the go-to apple of all varieties of apples if you love a mix between a sweet and a tart flavor. Fuji apples also have a nice bite to them instead of a mealy texture like other apple varieties. Fuji apples glow a beautiful red color with hints of yellow and pink within their peels. They have a sharp, sugary bite that make them perfect for caramel apples or smoothies. They originate from a town known as Fujisaki in Japan and are a mix between Red Delicious apples and Virginia Ralls Janet apples. They’re available in the United States all year round.

The most sought after apple variety in the United States is the Honeycrisp variety. Honeycrisp apples are red, yellow, and pink in color and only available four months out of the year from September through January (and in August in February in some regions). They’re large in size and have a crisp, sweet bite that’s like biting into a juicy piece of candy! Honeycrisp apples are a cross between a Macoun and Honeygold apple and were first discovered in 1991 through a breeding test at the University of Minnesota.

Gala apples are especially creamy with hints of vanilla and fall spices. They’re rich in nutrients just like all other apples but offer a more mild flavor than Granny Smith or Fuji. Gala apples are one of the most popular apple varieties in the United States and are available most all year round. Gala apples are a cross between a Golden Delicious and a Kidd’s Orange Red apple and were first introduced in the 1970’s.

Granny Smith apples also have an especially sweet flavor, but their tart flavor can sometimes lead people to believe otherwise. Granny Smith apples are a great choice if you love firm apples with less of a gritty feel. They’re also the apple variety with the second highest antioxidant content, only falling behind Red Delicious apples. They were discovered in Australia in 1860 but came to the United States in 1960 where they first appeared in Washington throughout various apple farms.

This lesser known variety is quite the treat since it is only available in the winter months. It’s brilliantly red in color and offers a crisp, sweet bite with a buttery finish. It’s especially popular in baking recipes and goes great with spices like cinnamon and vanilla. Jonagold apples were first introduced in 1953 in New York when apple farmers experimented with cross-pollination of Golden Delicious and Jonathan apple seeds. Jonagold apples are one of the most unique apple flavors to try if you ever get the chance and are perfect for your apple pies and crisps!

Koru apples may be new to you as they were to me this year. They’re just now starting to appear in the United States and originate from New Zealand. Not just a variety, but an actual brand of apples, Koru apples offer a very sweet flavor with a velvety, buttery flesh. They’re very slow to brown and are a bright red color with hints of golden yellow throughout their peels. If you love Honeycrisp apples, put Koru on your plate to try something new and delicious!

Pinata apples are a real treat during the early winter months and are only available November through early June. They’re tiny in size, which means their sweetness is more compact but still incredibly satisfying. Pinata apples are a mix between three heirloom varieties- Cox’s Orange Pippin, Golden Delicious, and Duchess of Oldenburg. They were first introduced in the United States in 2004 and became a best-seller in no time for their crisp bite with a sweet, tropical flavor.

Red Delicious, Rome, Golden Delicious, and Braeburn apples are other varieties that are incredibly tasty, but are a bit less sweet in flavor. Any type of apple makes a great choice, so test out a variety this week and have one a day as an afternoon snack to find your favorite variety of apples. What types of apples do you normally buy and which ones would you like to try?