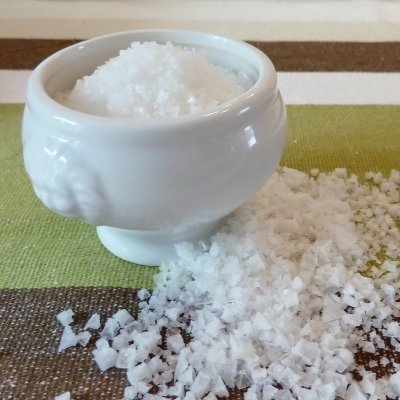 Probably the best place to start with all the things to know about Fleur de Sel! Fleur de Sel, meaning ‘flower of salt,’ is sea salt that is hand harvested by workers who scrape only the top layer of salt away before the rest sinks to the bottom of a salt pan. This process results in a much more complex flavour than normal table salt, as well as flaky texture and sometimes pink or grey colour.

2. What Makes It so Special?

The fairly labour intensive process to harvest Fleur de Sel combined with the amazing flavour of the resulting product can see certain rare batches sell for as much as two hundred times the amount of standard table salts. An old tradition used to be that only women were allowed to manufacture Fleur de Sel, in honour of the salt’s delicate qualities.

3. When and How Should You Use Fleur De Sel?

The delicate and luxurious nature of Fleur de Sel means that it is not a condiment to be used during the cooking process, as extremely high temperatures cause the flaky grains to melt and lose their individual nature. The correct way to use it is to sprinkle a pinch over a finished dish that needs a little more flavour, anything from fish, to vegetables, to meat and even a chocolate dessert that you think needs a savoury kick.

4. What about the Science?

In the world of salt, the rule of thumb is that the more refined a grain of salt is, the ‘saltier’ it tastes. Therefore, the refined chemical compounds that comprise Fleur de Sel have given it a reputation for being one of the ‘saltiest salts’ that you can buy. This powerful, immediate flavour that Fleur de Sel offers has led to it being described as tasting of the ocean, and its extreme taste has contributed to the savoury/sweet craze of recent years. Salted caramel, anyone? Yum!

5. What is the Big Difference between Fleur De Sel and Other Salts?

The main and telling difference between Fleur de Sel and regular table salt or Kosher salt is that whilst the others are grown and manufactured from inland salt deposits, Fleur de Sel is derived directly from the sea. This is something that you can really tell the difference by in terms of flavour and colour.

6. How Much Does Fleur De Sel Cost?

Much like wine, the cost of Fleur de Sel can vary depending on quality and location. 250g (8 oz) worth from the French region of Guérande will set you back approximately $9. In the United States the same measurement can cost anything up to $24, but remember that Fleur de Sel is supposed to be used sparingly, and that amount can potentially last you an entire year of sprinkling.

7. Are There Any Substitutes to Fleur De Sel?

If you want to test the waters before deciding to purchase the proper article, there are a few alternatives that can give you the feel of Fleur de Sel without the cost. Maldon salt is another flaky salt that can be used to finish off a plate of food, but its flavour will not linger on your taste buds for quite as long. And of course, if crunch is what you are after, unrefined sea salt is always a solid choice.

I use Maldon salt quite a lot, but since I’ve learned what Fleur de Sel is, I’m on the lookout for some. You fancy giving it a try?