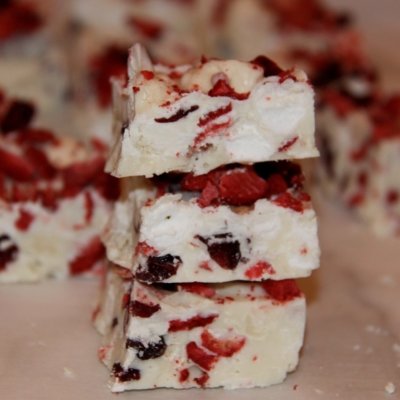 There are so many varieties of fudge. Once you know a basic recipe you can have a ton of fun playing around with flavors, making up your own fudge recipes. Let's see if any of these varieties of fudge will become your favorite.

No matter what varieties of fudge you are going to be tempted by from this list, you always need a simple recipe to start with.

That's quite a claim. You need to try so you can judge for yourself.

Why should vegans miss out on the yummy stuff?

There's always room for "three chocolate" anything in your life.

Oreo cookies and sprinkles - you have to keep this under lock and key away from the kids. You can always leave off the sprinkles.

If you love Samoa cookies, you'll love this fudge recipe.

Via Snickerdoodle Fudge - I Heart ...

Perfect for when you want a cinnamon-y sugary treat.

Is there anything that you can't stick cookie dough in?

Made in minutes. Scoffed in seconds. And endless flavor possibilities.

Made from a Jello pudding mix.

This is one of the varieties of fudge ideal for the holidays. Decorate it with dark green and red icing to make it festive.

No one is going to complain about this flavor are they?

The rich creaminess of Baileys is perfect for fudgy
concoctions.

Such a pretty triple layer fudge. I think I would like mine more pink and more green in color.

Whip up a batch for Halloween.

I must confess I have never thought about lemon as a fudge flavor before.

I'm more than rather partial to cherries. This wouldn't last long.

With just 5 ingredients, you can make a scrummy treat.

For vegans who don't want a chocolate fudge.

I suppose this is a little bit healthy because you get some of the goodness from the spices in the chai tea.

I don't think I could resist dipping this in chocolate.

As I'm British I had never heard of Orange Julius so you'll have to tell me if this is anything like it should be.

While lots of varieties of fudge are good for the holidays, some are simply perfect.

If strawberry is your preferred flavor of cheesecake, you're
going to love this.

That peppermint drop is going to provide a nice crunchy contrast to the smooth creamy fudge.

If you steer clear of Cinnabon for fear of the calories, indulge in a wee piece of fudge instead.

Via Recipe Not Available | Taste ...

Layered varieties of fudge are great for when you can't decide on one flavor.

No turtles are harmed in making this fudge.

If you don't know, Kahlua is a coffee flavored liqueur.

Cake or fudge? Fudge or cake? Oh dear, what a hard decision.

Via Fudge Candy Corn - Something ...

Such fun for Halloween or movie night in. It’s achieved with food coloring but I guess you could change the flavors too.

Oh yum! Cotton candy is such fun but very messy. Not so when it's fudge.

Oh. My. Caramel. Pretzels. Butterscotch. A combination
devised by the angels.

And if you don't want the pretzels and caramel, here's plain old butterscotch.

Via Pumpkin Praline Fudge - Something ...

This is a delicious recipe for fall.

I don't think I could give up my mini chocolate eggs - even to make fudge!

The tart cranberries will really cut through the smooth sweet creaminess of white chocolate.

Maple and walnut is a match made in heaven.

That has to be one of the smoothest looking fudges ever.

Make a batch for your Reese's loving partner for Valentine's Day.

Simple to make 'cos it's just a cheescake flavored fudge with caramel and pecans on top.

Via Amaretto Fudge - Crazy for ...

This is a clever little doozy. The apple pie filling is inside the fudge and it's topped with a gingersnap fragment to represent the crust.

Just the name will get you drooling.

That's not a fudge. That's a full dessert course.

I had to look up the 3 Musketeers bar to find out what it is. We have something similar in Europe called a Milky Way, but it only comes in the one flavor and it isn't strawberry. I guess this is one of the varieties of fudge limited to Americans.

Via Wake Up Wednesdays - Heather's ...

We all love no-bake recipes - right?

Via Peanut Butter and Jelly Fudge

With all the time pressure of the holidays, it's good to know there are brilliant no-bake recipes for yummy treats or homemade gifts.

This has inspired me to look for other fudge recipes of my favorite cocktails.

A scrummy brown sugar based fudge easily made.

Via Butterfinger Fudge - Crazy for ...

Another fudge recipe based on a US candy bar I hadn't heard of :(

The name is so evocative.

Fudge with a touch of class.

Via Gingerbread Fudge - Crazy for ...

Get into the holiday spirit by making some gooey gingerbread fudge.

It's so deliciously rich, a single piece will suffice.

Via Bubblegum Fudge | The Domestic ...

A decadent treat for you or a nice gift for a special someone.

Just 2 ingredients - anyone and everyone can make this
fudge.

Make in the winter to remind you of summer days.

Via Baileys Irish Cream and Pistachio ...

This sounds so good.

Just 4 ingredients and 10 minutes is all it takes.

No need to build a fire for this.

Via Pumpkin Coconut Fudge - My ...

If lemon Oreos are your favorite this is one for you.

Via My Favorite Fudge Recipes - ...

Via White Chocolate Fudge with Cranberries ...

Love the chocolate coated coffee bean in every piece.

Macadamia nuts have such a creamy texture - great for fudge.

I think that's plenty of fudge recipes for now. I hope you will find a few favorites among them. Which are you going to make first?