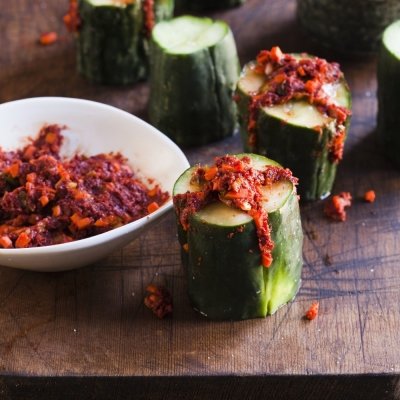 There are loads of reasons to eat cucumbers. You might look at this vegetable and not see much. After all, it isn’t classified as a super food and it doesn’t appear too often in gourmet meals. But sometimes the most humble of foods can give you a wealth of health benefits that totally make it worth it. Cucumbers are one such veggie. Use them in salads or on sandwiches. Make tzatiki sauce or just snack on them with ranch dressing. No matter how you eat them, there are plenty of reasons to eat cucumbers, so toss some in your cart next time you get groceries.

One of the best reasons to eat cucumbers is that they are loaded with water. It’s important to get enough fluids every day because your body relies on that fluid to stay healthy. However, you don’t have to get it all from your water bottle. Eating foods that are high in water also contribute. A cup of cucumbers contains 115 grams of water, so eat up!

We all want to watch out weight and make food choices that keep us healthy and slim. Cucumbers are a great addition to any healthy meal plan because a cup only has a mere 14 calories. That means you can eat quite a few cucumber slices without ruining your health goals. Just go easy on the dip because it can really do you in.

Yes, you read that right! There are two types of carbs – the simple and the complex. The bad kind are the ones that come from junk food like brownies and cookies. The good kind are your body’s main source of energy and come from foods that include veggies like cucumbers. By including them in your meal plan, you get the energy you need to power through the day.

Potassium is a nutrient that doesn’t get a lot of attention, but it’s pretty important. It works to regulate your blood pressure, so not getting enough can really spell trouble. Fortunately, including cucumbers in your diet can help contribute to your daily intake goals. A cup of sliced cucumbers weighs in with 162 milligrams of potassium. Toss them in a salad and you get a good portion of the day’s needs on one plate.

You probably think citrus when it comes to increasing vitamin C intake. Cucumbers don’t contain enough of the vitamin to meet your daily intake recommendations on their own, but they certainly contribute. A cup adds about 4 milligrams to your goals, so crunch away!

If you want to increase vitamin K intake, cucumbers are a viable option, with about 9 micrograms per cup. This vitamin plays a role in blood clotting so you definitely don’t want to skimp on it. A deficiency isn’t too common, but cucumbers taste so good, so why not contribute to your intake by including them in your meal plan? You won’t be sorry!

Folate, also known as folic acid, is a nutrient that pregnant women need in the right amounts. In fact, you should be downing the recommended amount even if you aren’t expecting because the nutrient prevents neural tube birth defects before you even know you’re pregnant. Cucumbers contain about 17 micrograms per cup, so load up.

Do you like cucumbers? I love them on sandwiches and in salads! I hope you’ve learned something new about this vegetable. Are you going to add them to your grocery list?