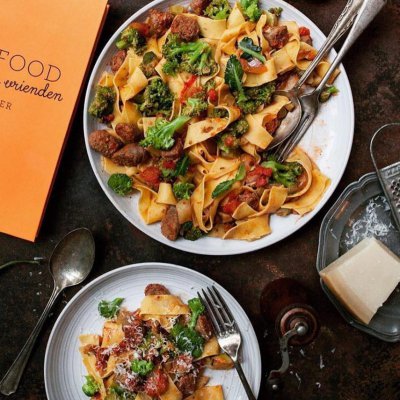 The world's top chefs have enjoyed star status since well before the arrival of television. In days gone by Europe's aristocratic houses, popes and cardinals used to compete for celebrity chefs of the day, paying them lavishly compared to the rest of their servants. Today, celebrity chefs reach us through TV, YouTube and books. Here are some of the brightest stars on our food firmament – some might say they’re the most popular chefs in the world today:

Jamie Oliver has made it his mission to inspire new generations of British chefs. He is listed as one of the richest men in Britain, having numerous TV shows under his belt (The Naked Chef, aired in 1999 was the first) and 16 cookery books. He owns 28 restaurants around the globe and specialises in Italian cuisine.

Nigella Lawson does not hold a formal qualification as a chef or own a chain of restaurants, but wrote a series of cookery books and presented equally successfully on TV. Worldwide she has sold 6 million books. Her How to be a Domestic Goddess cookery book won the British Book Award for Author of the Year when it was published.

Having worked in Austria and France, Wolfgang moved to the US at the age of 24, where he settled in Los Angeles. Soon after he gained the attention of Hollywood's A-listers. Wolfgang's business empire is valued at over $500 million. He now owns 21 restaurants and Wolfgang Puck cafes.

As the first chef from Scotland to win three coveted Michelin stars, Gordon Ramsay can look back on 16 Michelin star wins for his international signature restaurants in total. Renown for demanding culinary perfection, he is also famous for his fiery temper. He has presented shows like "Kitchen Nightmares", "Hell's Kitchen" and "Master Chef", that have stayed in viewers' memory not only for their delicious recipes but also for Gordon's rich "blue" vocabulary.

The English celebrity chef is predominantly famous for his scientific approach to cooking and unusual food combinations. He began with ice cream experiments, inventing bacon and egg ice cream (breakfast in a cone), inspiring a whole new generation of cooks with his scientific understanding of food. He owns four restaurants: the Fat Duck with 3 Michelin stars was voted the number one restaurant in the world. He also appears in his own TV shows and writes cookery books.

TV shows The Next Food Network Star and Guy's Big Bite on Food Network attract more male viewers than any other shown on the network. Guy published two books, both New York Times bestsellers, which has helped him to amass an estimated $8 million so far.

Marco Pierre White, now the Godfather of contemporary British cuisine, was the youngest chef to ever be awarded three Michelin stars, which he received aged 33. He was Gordon Ramsay's mentor - two peas in a pod - for British celebrity chef Marco is also known for his fiery temper. He was head chef in the "Hell's Kitchen" TV program and has published several cookery books, including Wild Food From Land And Sea and White Heat.

Worth more than $70 million, Emeril Lagasse opened his first restaurant in 1990. Now he owns several restaurants, has published a series of cookery books, has his own cookware brand and is in charge of a charitable foundation. His TV shows, Essence of Emeril and Emeril Live for example, are among the most popular TV shows on Food Network.

Anthony was the executive chef of Brasserie Les Halles in New York, before he embarked on a successful career in TV, where he presented cookery shows like No Reservations and The Layover on Travel Channel. He also published cookery books like Kitchen Confidential and Adventures in the Culinary Underbelly.

Her influence on American cooking is undisputed. She made French cuisine accessible to the general public, having trained at the Le Cordon Bleu cookery school in Paris. In 1963, she became a household name when her cookery show, The French Chef, was broadcast. Several TV shows and cookery books followed, before the late Julia Child received the highest honour the French government can bestow on non-French citizens, the Légion d’Honneur.

Celebrity chefs clearly have come a long way since Scappi, the personal chef of Pope Pius IV and Pius V, published 1,000 recipes in the world's first recipe book in the 16th century! Who is your fave celebrity chef?