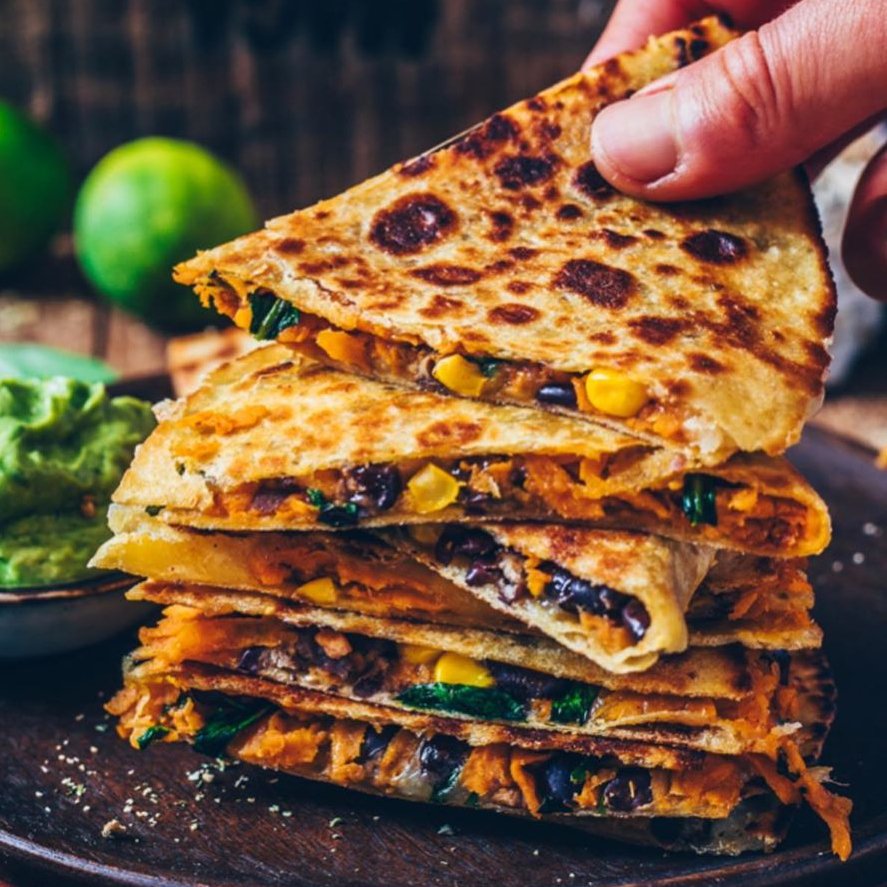 These quesadilla recipes are sure to give your taste buds something to sing about, but they’re also easy to make. A quesadilla can be so much more than just melted cheese on a tortilla. You can mix and match a huge amount of ingredients to create new and tasty versions anytime the mood strikes. Start with these quesadilla recipes for all the inspiration you need.

Chicken tastes great with melted cheese, but the addition of veggies in this, one of my favorite quesadilla recipes, really gives it something special. Perhaps a little more effort than just cheese, but you’re sure to love this variation.

Directions:
Preheat the broiler and grease a cookie sheet. Mix the fajita seasoning into the chicken and arrange on the baking sheet in a single layer. Cook under the broiler until cooked through, about 5 minutes. Preheat the oven to 350 degrees. Heat the oil over medium heat and add the peppers, onions and chicken. Cook for about 10 minutes, or until the vegetables soften. Divide the chicken mixture on one half of each tortilla. Sprinkle with the cheeses and bacon bits and fold in half. Cook the quesadillas on the baking sheet for about 10 minutes, or until cheese melts.

There’s not much I like more than smoked salmon, so this is a great recipe to satisfy that craving. It’s not like anything you’ve ever had, but I promise that you’re going to want to make this one all the time.

Directions:
Heat the grill over medium heat. Oil the grate just before cooking. Spread half of the herb cheese on 4 tortillas. Layer with an even amount of smoked salmon, capers and jack cheese. Top with the other 4 tortillas. Stir together the dill and sour cream in a small bowl and set aside. Cook the quesadillas on the grill for 3 to 4 minutes per side, or until the cheese melts. Garnish with avocado, tomatoes, onion and crème fraiche.

Tortillas make a great substitute for bread, so making your favorite sandwich variation on one is a fun and delicious way to shake things up at mealtime. Try this mouthwatering version for lunch or dinner.

Directions:
Heat the grill to medium heat. Brush one side of the tortillas with yellow mustard and evenly pile on the ham, pickles, pork and cheese on 4 tortillas. Cover with the remaining tortillas and grill for about 2 to 3 minutes, or until the tortillas are browned and the cheese melts. Slice into wedges and serve.

There’s something about the creaminess of avocado combined with a crispy tortilla that just tastes so good. This quesadilla is the perfect way to combine them into one meal.

Directions:
Combine the tomatoes, avocado, onion, lemon juice and Tabasco in a small bowl. Season with salt and pepper to taste. In a separate bowl, stir together the sour cream, coriander and salt and pepper to taste. Brush the tortillas with oil and broil for 2 to 4 minutes. Sprinkle with cheese and broil until it melts. Top 2 tortillas with the avocado mixture and top with the other 2 tortillas. Cut into wedges and serve with the sour cream mixture.

What better way to eat more bacon than to put it in a quesadilla? The combination of the soft tortilla and the crispy bacon is really awesome.

Directions:
Preheat the oven to 400 degrees. Divide the cheese, bacon and green onions evenly on half of each tortilla. Fold and place on a baking sheet coated with cooking spray. Bake until golden brown, about 8 to 10 minutes.

Goat cheese is one of my absolute favorite kinds of cheese, so this quesadilla is a winner in my book. It’s sort of a gourmet take on this classic recipe, so this one is perfect for a dinner party or a fancy brunch.

Directions:
Heat 1 tablespoon of the oil over medium-low heat and cook the asparagus until tender and browned, stirring occasionally. Remove from heat and season with salt and pepper to taste. Spread ½ the goat cheese on one side of each tortilla. Top with even amounts of asparagus and cilantro, fold the tortillas and brush with remaining oil. Cook the quesadillas for about 3 minutes per side or until lightly browned. Cut into wedges and garnish with additional cilantro.

Corn and black beans taste so great together, but sandwiching them inside a quesadilla takes them to a whole new level. Kids love this one!

Directions:
Mix together the mayonnaise, cheese and salsa in a bowl. Spread ¼ of the mixture on each tortilla. Sprinkle with an even amount of corn, beans and green onions, then fold over. Preheat a skillet over medium heat and cook each quesadilla until lightly browned. Cut into wedges to serve.

Do you make quesadillas for a meal? Fill them with all these hearty ingredients and you totally have a filling meal anytime you’re hungry. They work great in lunchboxes too. Which one will you try first?