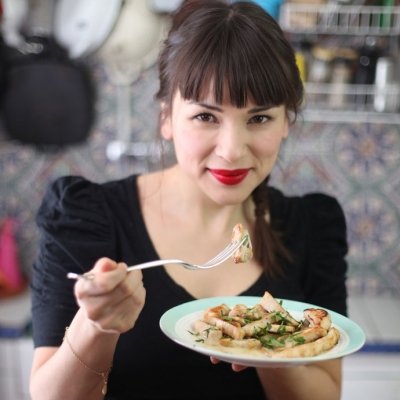 The simplest of reasons to love Rachel Khoo is her personality. She is simply charming. She speaks in non-cheffy language and at 34 years old, she still has a very much “young woman” attitude and outlook, so she is very easy to relate to. She has an infectious laugh that seems to ease the path with all the chefs, cooks, bakers and foodies she comes in contact with.

I’m not good at fashion so I can’t really give you an impression of her sense of style in a word or two but Rachel Khoo definitely has a “look”. She’s very feminine and kind of schoolgirl-ish elegant. You won’t see her in chef’s whites (unless demanded for a segment of her show) but instead, pretty tops, skirts and dresses (I don’t recall seeing her in pants!). And let's not forget her darling little aprons/pinafores.

This is how Rachel Khoo describes her attitude to food – “a fresh approach to all things edible”. She is a cosmopolitan cook who is influenced by her travels, the world she sees around her, the people she meets and the bounty of ingredients available rather than any trends in the food world/restaurant scene. She has a trusty notebook that is her constant companion and inspiration.

This is the series that first introduced the television world to Rachel Khoo. I watched in delight as Rachel introduced some of her favorite food places in Paris and then in amazement as she created delicious food in her tiny – not little – Paris apartment and served it to her friends and guests – four max, as no-one else could squeeze into her bijou home. And the Khoo kitchen in Paris, I must tell you, didn’t even have a full sized oven!

For her third series (after The Little Paris Kitchen and Rachel Khoo’s Kitchen Notebook: London) - Rachel Khoo’s Kitchen Notebook: Cosmopolitan Cook – we were treated to the culinary delights of six of Europe’s great cities. As a passionate traveler I loved the combination of food and sightseeing as Rachel went on various culinary adventures and then returned to her kitchen to make food inspired by what she had seen, who she had met and what she had tasted.

One of the reasons to love Rachel Khoo and her recipes is her lack of pretention. The food she makes is because she loves it – not because it’s trendy, not because it uses the latest ingredient that every other chef is calling the greatest thing ever. She makes things she wants to eat, that she knows her friends and guest want to eat and importantly, what you want to eat and are not daunted by the thought of her recipe.

One of my favorite reasons to watch Rachel Khoo is I simply love to see how she cooks. I mentioned that there’s a lack of pretention in her food – that also extends to her whole kitchen. You won’t find all the latest high-tech equipment and every single gadget of chefs or professional kitchens. You’ll find junk shop, thrift shop and flea market finds, mis-matched items, and improvised items in her cooking equipment, utensils and serve wear. But it all matches her perfectly.

I do hope you’ll try and catch Rachel Khoo’s television programs – they are a refreshing addition to food TV. She is very engaging and fun to watch and her recipes are easy enough to follow. Her website is rachelkhoo.com and has lots of interesting stuff other than food.

Have you watched Rachel Khoo before or tried any of her recipes?