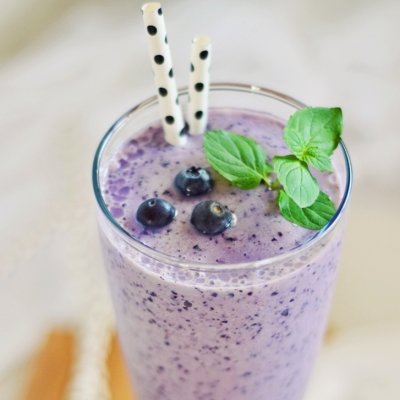 Fruit smoothies have got to be one of the best breakfast meals out there. You get a whole ton of vitamins and minerals in one glass. And it tastes absolutely delicious too! I'm sure you've heard that breakfast is the most important meal of the day, but it can be hard to get something cooked up in the morning. Fruit smoothies are the perfect option because you can easily whip one up in just a couple of minutes. Use these as inspiration.

Via Green Smoothie
One of the most popular ways to make fruit smoothies is to toss in a handful of kale or spinach. The fruit balances out the flavor and you get this great color.

Via Pineapple Sunrise Smoothies
The same goes for pineapple. It adds just the right bit of tropical flair to your smoothie.

Via Strawberry Lemonade Smoothie Recipe
For a treat, I sometimes use lemonade instead of milk or juice in my smoothies.

Via Raspberry Pina Colada Smoothie & ...
I think I'd feel like I was lounging on the beach somewhere while I drank this concoction.

Via Tropical Mango Pineapple Smoothie Recipe ...
Orange, mango and pineapple is perhaps one of the best smoothie combinations I've ever tasted.

Via Smoothies for Breakfast
Look at all those tasty ingredients. The blender is the best way to whip up a smoothie.

Via 20+ Delicious Smoothie Recipes
Mixing berries and mangoes for a smoothie is one of the best decisions you'll ever make.

Via Raspberry Coconut Smoothie {skinny, dairy ...
Who wouldn't want to drink this for breakfast?

Via Orange Creamsicle Smoothie. - Sallys ...
Citrus is one of the best things to add to a smoothie. I like to use orange juice with my fruit.

Via Mango Blackberry Smoothie - Creme ...
The presentation is almost as yummy as the taste of the smoothie.

Via Make-Ahead Oatmeal Smoothies
Adding oatmeal to your smoothies gives them a nice texture and lots of extra nutrition.

Via Tropical Sunshine Smoothie - Lovely ...
Tropical flavors are some of the best for a smoothie. Try oranges, pineapple, mango or coconut.

Via Paleo Watermelon Berry Smoothie | ...
Watermelon is so refreshing. The sprig of mint adds just the right amount of flavor.

Via Tropical Fruit Breakfast Smoothie. - ...
I like how the two flavors blend just a little so you get some different tastes with each sip.

Via Frozen Green Smoothie System | ...
A smoothie bar would be fun for a brunch party.

Via Carrot Pineapple Smoothie - Gimme ...
Carrots have just a touch of sweetness, so they work really well in a smoothie.

Via Peanut Butter Cup Power Smoothie
Peanut butter in your smoothie is a great way to give your breakfast an extra punch of protein.

Via Chocolate Banana Smoothie
For a sweet treat in the morning, add a few chocolate chips to your smoothie.

Via Back to School: Best Breakfasts ...
A muffin in a glass? Yes, please!

Via Peach-Mango-Banana Smoothie
Bananas and peaches are a tasty mixture too!

Via Pumpkin Cheesecake Breakfast Smoothie - ...
What a yummy fall treat!

Via Blueberry, Peaches and Cream Green ...
The name says it all! Doesn't this look tasty?

Do you like to make smoothies for breakfast? They also make a great snack or addition to lunch. Which one do you want to make first?