This is How Sprouted Grains Can Make You Healthier and Slimmer ... 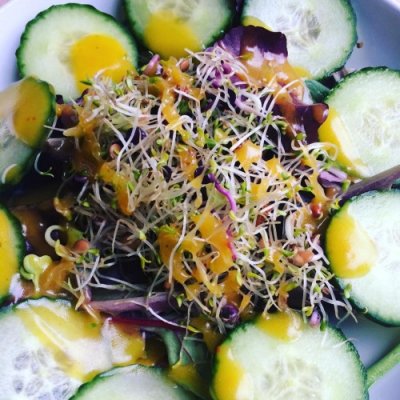 When you buy a grain product, it was likely harvested at just the right time. Sprouted grains are given just a little longer to ripen, which is when they sprout. You might be surprised to find out that sprouting a grain changes the taste and nutritional content of it. You’ve probably heard that sprouted grains are healthier and that is certainly true most of the time. Never tried sprouted grains? Today is the day to give them a try! According to the experts at Women’s Health magazine, this is why you need them in your diet right now.

1 Sprouted Grains Are Lower in Carbs

While your body does need some carbs to get through daily life, too many carbs can lead to weight gain. That’s why low-carb diets are usually sparse in grain foods like bread, crackers and cereal. When a grain is allowed to sprout, it digests some of its own carbs, resulting in lower carbohydrate foods. That makes sprouted grain products a viable option for a weight loss diet.

2 You Get More Protein in Sprouted Grains

As the grains are sprouting and digesting some of the carbs, the same enzymes also break down the protein in the grains, releasing the amino acids. You need these amino acids for pretty much all of your bodily functions and research shows that eating sprouted grains can dramatically increase the amount of them you get in your diet.

When a sprouted grain blooms, it breaks down many of the sugars that can lead to bloating when you eat traditional grains. These sugars tend to ferment during digestion, which is when you get bloated and uncomfortable. Since the sprouted grains have far less of these sugars, you can safely eat them without worrying that your favorite pair of skinny jeans doesn’t button.

4 There Are More Nutrients in Sprouted Grains

Just like there is more protein in sprouted grains, there are also more nutrients overall in such products. This includes vitamins C, many of the B vitamins, iron, zinc and loads of antioxidants. That means you can boost your immune system, have more energy and ward off a range of health issues, from cancer to heart disease. Experts say that sprouting may make the nutrients easier for our bodies to garner.

You may need to go to a health food store to find sprouted grain products, but if you can get your hands on them, you can do many things with them. Look for sprouted grain pasta, bread, tortillas, buns, pancake mix and cereal. You can eat them in moderation while also boosting your health at the same time.

6 The Flavor Can Help You Eat Less

Because sprouted grains have such a unique flavor, you may be able to eat them in smaller portions. That means you can enjoy your favorite sandwich without going overboard. You can also enjoy pasta without any guilt. What more could a girl want?

7 Of Course, You Don’t Have Free Reign to Go Crazy

Yes, sprouted grains are healthy option for any meal plan, but that doesn’t mean that more is better. Sprouted grain products still contain calories and eating too much of them can lead to weight gain. Be sure you moderate your portions so you can enjoy favorite foods.

Have you ever tried sprouted grains? Do you like them or not?