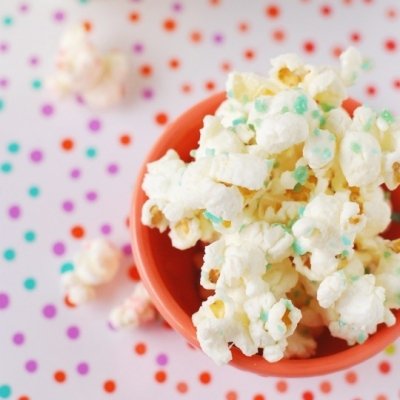 I always knew it was a versatile snack but I never imagined just how many potential varieties of popcorn there are. The mind boggles. Plain popcorn is a brilliant carrier for flavors and sweet or savory - doesn't matter - the sky's the limit. You're sure to find a favorite - too many favorites, maybe - in these varieties of popcorn.

If there's one thing about all the following varieties of popcorn it's not to be intimidated by any. Generally, if a flavor works away from popcorn, it's going to work with popcorn. Salted caramel is being used in all sorts of dishes and recipes. Makes sense it goes great on popcorn.

Another fabulous use for coconut oil you might not have thought of.

Never has popcorn looked so pretty.

Is there anything that bacon can't do?

A match made in heaven.

One of the best if you like your popcorn flavors to be sweet and yummy.

Some varieties of popcorn are just sooo simple.

Make for holiday gifts (hide it away from the family though)

No need to worry about there being no campfire when you can make s'mores popcorn.

Now you know what to do with those Christmas M&Ms.

I'm looking forward to trying some spicy varieties of popcorn.

Parmesan is a really good ingredient for savory popcorn.

Via The BEST Chewy Caramel Popcorn ...

You'll have to make this to test out the claim it's the best chewy caramel popcorn ever.

Sweet and salty and super-crunchy.

The flavoring in this is actually nutritional yeast, not cheese.

Who can resist popcorn smothered in a spicy, buttery buffalo sauce?

Another of our favorites gets the popcorn treatment.

Via Peanut Butter Popcorn - The ...

Parmesan and ranch? Yum yum in my tum.

Some flavors for popcorn are just perfect for certain occasions - like this one for Easter.

The classic flavors of garlic, basil, parsley, olive oil and salt work just as well with popcorn as with breadsticks.

Via The best Lemon Popcorn recipe ...

This is just a case of using different food colorings on small batches of your chosen flavor of popcorn and mixing them together.

Jazz up your basic caramel popcorn with chunks of your favorite chocolate or candy bar.

Made in just 3 minutes. Now that's what you call fast food.

Make for St. Patrick's Day or just because you love Lucky Charms.

What could be easier than mixing popcorn with melted white chocolate and adding Christmas colored sprinkles. And for other times of the year, change the color of your sprinkles.

How do you get popcorn to taste like hot cocoa? You mix it with cocoa powder, sugar and a bit of cinnamon. Sprinkle chocolate chips & mini marshmallows and you're set.

Via Pink Trash Popcorn - Something ...

Made with Pink Wilton Candy Melts and Golden Oreos.

Popcorn gets the Italian treatment.

Via Valentine's Hutch and Orange Dreamsicle ...

You can make some yummy varieties of popcorn with so few ingredients. This one takes just three.

And this one is just 4 and you can make it in under 5 minutes.

A perfect combination of salty popcorn and sweet peppermint. And chocolate. Of course. You mustn't forget the chocolate!

I'm not a fan of black pepper so this is one of the popcorn varieties I won't be trying.

Via Cilantro-Lime Popcorn | Bake Your ...

This smells heavenly and tastes divine.

Can you wait for the holidays?

A really great way to use Almond Joy bars.

Another of the savory popcorns with a Mediterranean flavor.

And from the Med, it's back to the USA and the Old South.

The taste of the carnival.

Via KOOL-AID Popcorn Recipe Use a ...

I've no idea what Kool-Aid is and we don't have it in the UK, but those colors look toxic ^_^

For when you want a taste of the Tropics.

A copycat of Garretts famous popcorn.

Leave it just as is with only chocolate or add some M&Ms.

Via Peppermint Patties Popcorn - A ...

Chop up some peppermint patties and drizzle some melted chocolate and you're good to go.

A different way to get a caffeine boost than a cup of Joe.

Any time red is called for, this popcorn comes to the fore

It's a cold evening so snuggle up on the couch, get under a cuddly throw, put your favorite movie on and reach for the popcorn.

Add your favorite nuts to a basic caramel popcorn recipe.

Via Samoas Popcorn - Something Swanky

I wouldn't be able to resist this.

Lots of spices combine to bring you the taste from south of the border.

Fudgy and minty and chocolaty. What's there not to like?

Sometimes, just sometimes, you want your popcorn flavors to be as simple as they come.

Serve this with pre-dinner drinks for Thanksgiving.

But don't serve this with pre-dinner drinks on Thanksgiving because it's too irresistible and no one will stop at a just a few kernels.

Via Sriracha Popcorn | Bake Your ...

This will spice up your life.

Bake your own red velvet cake or make up a boxed mix. Break it up. add to popcorn with melted white chocolate and hey presto, red velvet popcorn. Going to make some to share with your hunny on Valentine's Day?

Via Old Bay Seasoned Popcorn (aka ...

I've not tried Old Bay seasoning but apparently it makes this popcorn taste like crab.

Via Gourmet Popcorn Recipes for Movie ...

For this you need Dark Chocolate Almond Laceys and some Chocolate Candy Melts.

I had to read the title of this recipe twice. pickle juice? Really? I love pickles and I love hot sauce. Maybe I would give this a try.

Don't know what to do with banana pudding? Betcha never
thought about using it for popcorn?

If you've never tried anything with chili and chocolate, you really should and this is a good place to start.

Would you pull out the mini eggs to eat them separately? Yeah. Me too!

Via Cinnabon Popcorn - The Girl ...

How long will you be able to resist dipping into this?

It's obscene that bacon tastes so goods in so many ways.

I can't make up my mind if this is Thai or Mexican inspired. Heck who cares - it's great anyway.

Via Maple Pumpkin Spice Popcorn with ...

Well whichever nation inspired the previous flavor, it's obvious this is all home-grown American.

Via chunks of temptation: salted caramel ...

Be careful of the salt in this one - you're getting a double dose with the salted caramel and the pretzels.

Of course it's Oreos but I reckon Gypsy Creams ( a UK cookie) would work just as well.

Via 17 Movie Candy-Popcorn Combos That ...

I think I would throw some jelly beans or some fruit gums in there too!

This has got me thinking. I wonder what other varieties of popcorn there are containing alcohol? Know of any?

There are very few things that can improve s'mores, but bacon will do it.

Via Taco Popcorn | Gimme Some ...
Packed with those special seasonings that give tacos their special taste.

I hope you will find many flavors of popcorn here that will dance on your taste buds. Was your favorite here? Do you have a special recipe you can share with us?