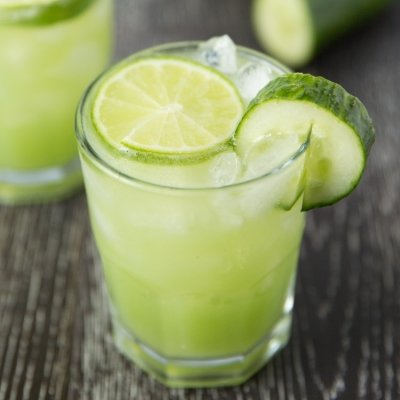 If your garden is overflowing and you're on the hunt for ideas for cucumbers, you've come to the right place. And you are not alone. My garden is giving me more cucumbers than I know what to do with. If you're tired of eating them plain, have a look at these ideas for cucumbers and you'll be all set with some great new ways to gobble them up.

Via Low Carb Recipes
One of my favorite ideas for cucumbers is to make a simple salad. A bit of mayo, white vinegar and dill is all you need to make a delicious dressing.

Via Cilantro-Lime Cucumber Salad - The ...
A dash of crushed red pepper flakes really brings out the flavor of fresh cucumbers.

Via Easy Refrigerator Pickles
There's nothing better than a homemade jar of pickles and you'll be surprised at just how easy they are to make.

Via Tuna Salad Cucumber Rolls
Thin slices of cucumber are great for rolling up tuna or any other filling you love.

Via Cucumber-Lime Vodka Coolers - Dishing ...
Cucumber is so refreshing and adding it to a cocktail is an idea that is so genius!

Via Quick Cucumber Kimchi
This looks delicious plain, but would also make a great addition to salads or sandwiches.

Via notwithoutmymom.com
Nothing goes together better than cucumbers, tomatoes and red onions. Yum!

Via Tailgating
These look so tasty. I would probably have a hard time stopping at just one or two.

Via All About An Appetite
Try something new when you make salsa by using some fresh cucumbers straight from your garden.

Via Asian Cucumber Salad
You'll see cucumbers on Asian menus from time to time and they pair really well with soy sauce and sesame seeds.

Via Easy, Delicious & Healthy-Authentic Greek ...
I love Greek salad with tons of cucumbers and black olives.

Via Easy Cucumber Salad
Bring back all the flavors of summer with this yummy salad in a jar.

Via Cucumber Subs Are A Quick ...
Sub out the bread in your favorite sandwich with cucumbers for a whole new taste creation.

Via Tomato Cucumber Pasta Salad with ...
The great thing about pasta salad is that you can eat it warm or cold so it works for anytime you have a craving.

Via Garlic Cucumber Dip
Make this for your next party and watch how fast it gets gobbled up.

Via Smoked Salmon and Cream Cheese ...
I would not be able to stop eating these. Don't they look delicious?

Via Stuffed Cucumbers
If you've never had a stuffed cucumber, you are totally missing out! There are so many things you can fill them with for a delicious lunch or snack.

Via Cucumber Ranch Dressing
Cucumber ranch is delicious and it's even better homemade.

Via Easy Tomato Cucumber Hummus Snack ...
Doesn't this look like a snack you'd never get tired of eating?

Via Basil cucumber gazpacho - Amuse ...
Gazpacho is one of my favorite summer time meals. Making it with cucumbers gives it a refreshing flavor and a great color.

Via 12 Cool Cucumber Recipes - ...
The addition of garbanzo beans in your salad adds flavor and protein. And a taste that can't be beat.

Via Greek Cucumber Noodles | Cucumber ...
If you're watching your carbs or need gluten-free meal options, making "noodles" out your cucumbers is an easy and tasty way to do it.

Via 20 Unconventional Recipe Ideas Using ...
If you have a hard time drinking water because it's boring, try ramping up the flavor with mix ins. Cucumbers are a great choice!

Via Chilled Cucumber Soup Recipe from ...
I could eat this for lunch every day! What about you?

Via Top 10 Bridal Shower Appetizers ...
Hollow out the inside of thick cucumber slices about halfway down and you have the perfect container for any number of delicious fillings.

Via Crispy Cucumber Sandwiches
This looks like a yummy and filling lunch, don't you think?

Are you overloaded with garden cucumbers? I have been eating loads of salads and have been putting them on my sandwiches too. What's your favorite thing to do with cucumbers?