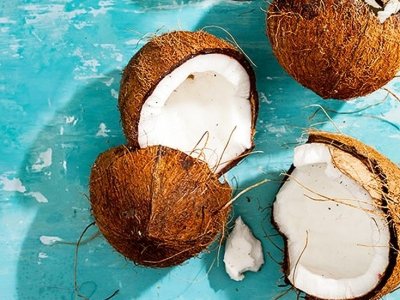 If you're as nuts about coconuts as I am, you'll love these fabulous facts about coconuts for coconut lovers everywhere. My love affair with the coconut began when I was small and I would eat anything from coconut biscuits to coconut cake to satisfy my adoration. Then when I grew up and realized the many beauty products containing coconut, I graduated to using it as a moisturizer, hair conditioner, lip balm and for oil pulling. In short, whenever I have the opportunity! Here are some facts about coconuts that will make you love them a little more.

According to botanists, coconuts are not nuts. They're a drupe. Yeah, I thought that was what happened to flowers when you didn't water them a lot, but actually a drupe is a kind of fruit. Other drupes include peaches, plums, apricots and cherries. They're basically a kind of fruit with a fleshy part surrounding a shell, which contains a seed or kernel. That's just one of the many fabulous facts about coconuts!

Did you know where the name for the coconut comes from? No, neither did I. The name derives from the Portuguese and Spanish word 'coco,' which means head or skull. When you look at a coconut you can see why, as the base of the shell has three holes, which look a bit like a cheeky face. In Malay, it is called 'pokok seribu guna,' which means 'tree of a thousand uses,' and in Sanskrit it is called 'Kalpa vriksha,' which has a similar meaning: 'tree providing the necessities of life.'

3. Waste Not Want Not

There's a good reason for the Sanskrit and Malay names for the coconut, as virtually every part of the coconut can be used in some way. Obviously there's the edible element and the delicious and thirst quenching coconut water. However, there is also the fibre from the husk which is used to make sacks, ropes, door mats and brushes. The foliage and timber from the coconut palm is used as building material. And let's not forget the copra, which is the dried meat or kernel of the coconut and used to extract coconut oil.

How many have heard those statistics about how many are killed or injured by coconuts each year? The figure can range from 150 to 300 but the fact is that nobody actually knows! One fact we do know about their killer past is that after surviving four months of intense combat in 1943, a Marine was killed in his sleep on Guadalcanal by a falling coconut. He had been scheduled to leave the next morning. A sad story but also a reminder not to sleep under a coconut palm!

What do you do when you can't climb up the coconut palm and harvest the fruit yourself? You get monkeys to do it, of course! In Malaysia and Thailand, monkeys, or more specifically, pigtailed macaques, are trained and competitions are also held to find the fastest monkey.

Have you ever wondered how they make the delicious coconut milk that you add to your cooking or the coconut oil that you use on your hair? Coconut milk is made by grating the white flesh and soaking it in hot water to remove all the solids. Coconut oil is made by pressing the raw flesh or by processing the copra, although the result of this is an unscented product (refined, bleached and deodorized - RBD).

What's the connection between John F Kennedy and a coconut? No, it's not a bad joke, there is actually a story behind their 'relationship.' Whilst commanding a torpedo boat in the Pacific during World War Two, it was hit by a Japanese destroyer, leaving JFK and his crew stranded in the Solomon Islands. But the humble coconut saved the day. To get help, Kennedy wrote a message in a coconut shell and sent it to a US base with two islanders who happened to be passing in a canoe. And where did the shell end up? As a paper weight on his desk when he became president. What a conversation starter and a reminder of how lucky he was!

So, these are a few things to ponder as you next use coconut oil in your cooking or on your person. Is anyone else as much of a coconut fan as me?