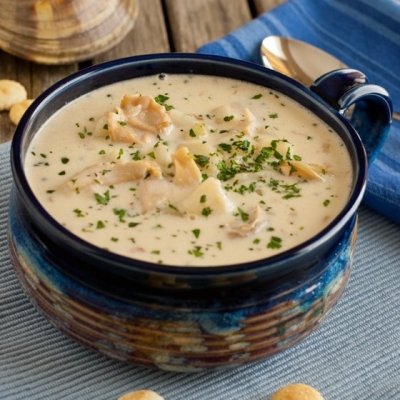 With so many choices when it comes to ingredients for chowder, there’s no chance you won’t find a mixture that you love. Chowder is a warming and comforting dish on a cold night, but you can also eat it when it’s warm outside. It heats up really well for leftovers the next day too. Making chowder is super simple and gives you a meal that you’ll want to eat all the time. Check out these tasty ingredients for chowder and let them inspire you to try new things when you prepare dinner.

No doubt you’ve tried clam chowder at some point in your life. Or at least heard of it. Clams aren’t the only type of seafood you can use though. Fish is one of the tastiest ingredients for chowder that you’ll ever find. All you have to do is cut it into manageable, bite-size chunks and season it well and you get a hearty fish chowder you’ll be proud of. Tilapia, cod and salmon are great choices.

To me, it’s not really chowder without that subtle underlying flavor of bacon to enhance the other ingredients. A couple slices of cooked bacon adds just the right amount of saltiness to your chowder and is so easy to add. It works in any kind of chowder and you’ll be so pleased with the results.

I think potatoes are one of my favorite foods. They’re easy to prepare and you can season them in a multitude of ways, which makes them perfect for tossing into chowder. Cubed potatoes work really well, but you can also mash them and stir them into the soup to give it a creamier texture that is a bit thicker at the same time.

One of my all-time favorite corn chowder recipes has diced green pepper stirred in. It might sound strange, but they cook just enough so that the flavor isn’t overpowering and it adds a slight crunch to your bowl. Diced bell peppers would make a great addition to many types of chowder, including clam and seafood versions.

If you like things a bit spicier, sub out the green peppers for diced green chilies. Poblanos are my favorite option. They’ll add just the right touch of heat to your chowder and will make the meal something really special. Green chilies are ideal in chowder recipes that star corn, salmon or chicken. Give it a try! You won’t be disappointed!

You don’t want to overload your chowder with cheese, but a handful is great for adding flavor and that creamy texture you crave. My best advice is to experiment with different types to find what you like. Cheddar works really well in potato based chowder and I really like queso fresco in corn chowder.

Sliced mushrooms make any bowl of chowder heartier without changing the flavor too much. They cook down really well without any extra effort, so all you have to do is toss sliced mushrooms into the pot. They work wonderfully in any type of chowder. That includes corn, seafood, chicken or veggie. In fact, you might like them so much that you create a mushroom chowder recipe.

Do you love chowder? It’s one of my absolute favorite kinds of soup! It’s always great in restaurants, but it’s so easy to make that you can easily create your own version right at home in your own kitchen. Which ingredients do you always add? Will you try one of the ones on this list next time you cook chowder?